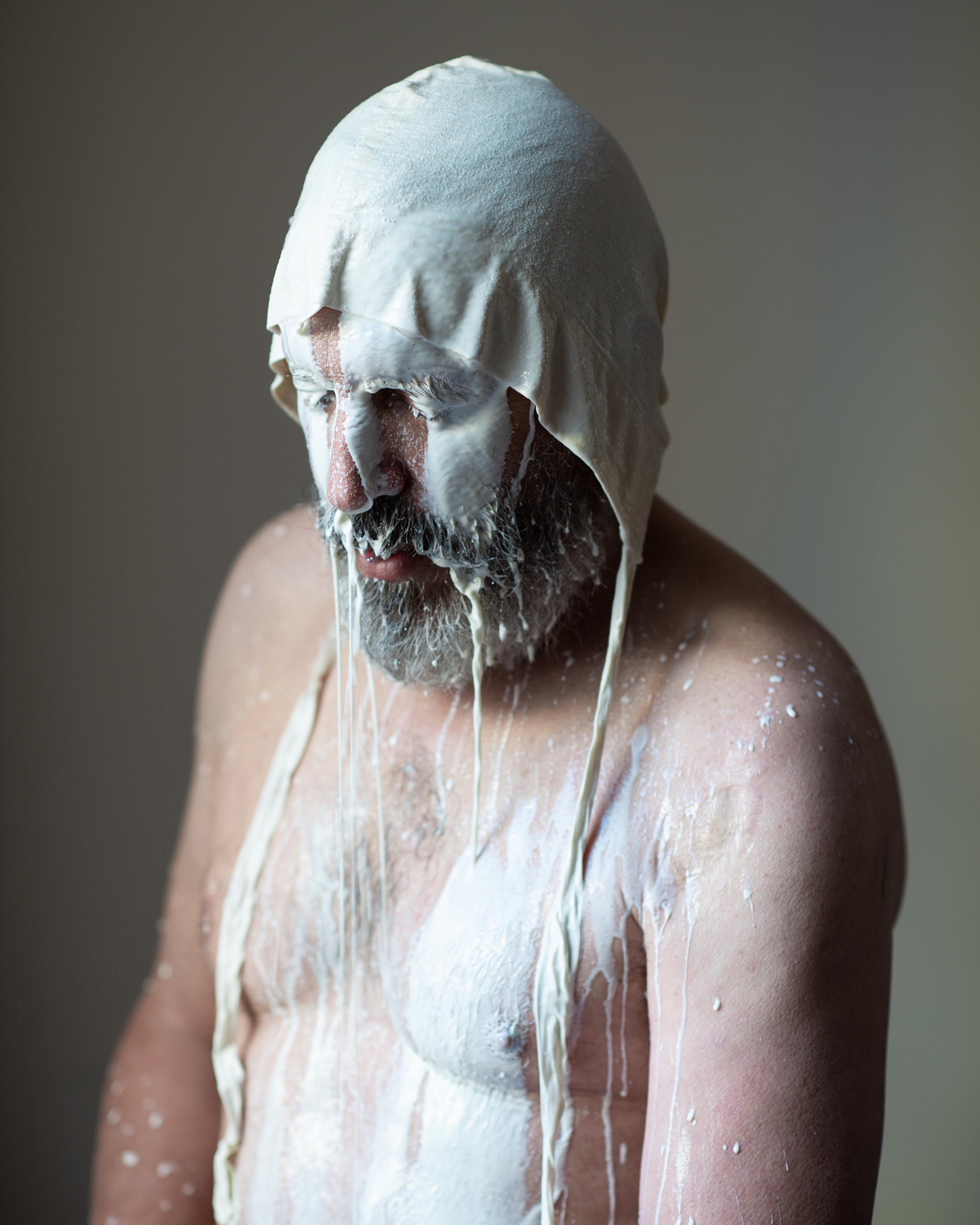 Stepping into Mark Sinks’ Commerce City studio space is like walking into the endless archive of an artist’s life. In fact, that’s exactly what it is. Large, rolling walls with deep bookshelves hold multitudes. Books, prints, analog cameras, antiquated magazines, photographic material, packaging from the 1980’s and 90’s, and more haphazardly fill the deep, wide white shelves. The great rolling walls protect the thousands of rolled-up prints he stores away from the sun, while simultaneously showcasing photographic and collage work through the angled sun-lit windows of his mid-century storefront in a neighborhood predominantly populated by blue-collar workers. Sink understands his surroundings and makes all attempts to appear non-threatening to the surrounding demographic.

This isn’t the first time Mark Sink has been hyper-aware of his status as a white middle-aged man. In the wake of the Me-Too movement and prevalence of “cancel culture,” Sink has been sensitive to educate himself in order to  examine and adapt to a more socially aware American society. He gave up nude female portraiture after many in the photographic community began to ask why so many male photographers gravitated towards them. He jokes that you can still teach an old dog new tricks, while lamenting his continued attachment to figurative work in general. He walks us around his studio, pulling out prints and telling stories of his days with “Jean-Michel” and Andy Warhol. He regales a story of when Warhol, who he refers to only by his last name, offered him a print on his birthday. He declined it, having been told that gift-giving was a way for Warhol to suss out who was a true friend and who was a proverbial leech on the scene. After a few hours in his studio with my colleague, fellow artist and friend, Sharifa Moore, he offered me a gift. It was an Instagram portrait printed from the cell phone of our mutual belated friend, Colin Ward, to which I had to retort, “I don’t know Andy, is this a trap?”

In his younger days in New York City, Sink got by photographing and sometimes receiving artworks in trade. Don’t take these run-ins and close friendships with some of 1980’s America’s most heralded minds such as Basquiat, Warhol and Keith Haring as an indicator of some imagined hierarchy or bolstered ego: Sink is far from unapproachable. His oeuvre is impressive, sure. Sink, however, is anything but Blue Chip. The artist, gallery owner, curator, educator, father and generally entertaining dude, has had his hands in just about every faction of Denver’s photographic art scene, if you couldn’t claim him damn near responsible for it.

Sink realized his inclination to gather people at a young age and claims his lineage partially responsible. His great-grandfather, photographer James L. Breese, founded his “Midnight Salon” in 1880’s New York, long before Alfred Stieglitz and his forming of the Photo Secessionists and the 1905 founding of 291 Gallery in Manhattan. Over a hundred years later, in 1993, Mark Sink would create his first Denver Salon: a collective of more than twenty Denver photographers.

Fast forward to 2021, and Sink has spearheaded some of Denver’s most notable programs: The Big Picture, Month of Photography, and Denver Collage Club. Sink co-founded the Museum of Contemporary Art Denver, as well as the now shuttered Gallery Sink, which saw great success from 1998 to 2008’s stock market crash. Having wheat-pasted much of the urban landscape of our fair Queen City with the Big Picture, curated countless exhibitions, exhibited his own work nationally and internationally, and educated multitudes of young photographers as the jokingly self-titled “Art Dad,” Sink has proven himself an integral fabric of our creative metropolitan community.

“Some of my favorite models [for creative spaces] are Rhinoceropolis and Glob, with group communal support through many different mediums, like music, art performances and art shows, festivals, tattooing and website design.” Said Sink in an October 5th, 2018 interview with Susan Froyd of Westword, titled “Colorado Creative Redux: Mark Sink.” Being in Sink’s workspace cemented exactly this proclivity for informal, more egalitarian creative collaboration without the hierarchical egoism of many modern art spaces. This tendency towards collectivity has been apparent since his founding of the Denver Salon in 1993 and has now evolved from a photographic collective to one focused on New Collection’s favorite medium: collage.

A recent project beginning in 2013, Sink and collage artist Mario Zoots, co-founded the informal, salon-style Denver Collage Club which continues to operate today, and has co-curated two recent exhibitions, opening this week. DCC runs as an invite-only collective to discuss and educate one another on historical and contemporary works, as well as inform themselves on the trajectory of collage works into the future. Artists are often encouraged to bring their own newer works, or simply nosh and gab with one another in a creative space. Beyond the social aspect, Sink believes that forming a network allows for greater international recognition, once again, constantly advocating for the exhibitions of fellow creatives.

In the upcoming Alto Gallery show THOUGHT OBJECTS: Being, Essence and Notion, Denver Collage club joins Redline Contemporary Art Gallery in a satellite show surrounding the “phenomenon of cancel culture” and “diving into personal introspections.” The show also reflects the “existential crisis spurred by the pandemic.” The show is co-curated by The Unperson Project, an archive of oblivion from the Mexico City-based curatorial duo, Andrea Tejeda and Susana Moyaho.

The second satellite show opening this week with Denver Collage Club is THREE ACTS: A Survey of Shame, Emotion, and Oblivion at Redline It is a part of the 2021 Month of Photography, now steered by Colorado Photographic Arts Center Executive Director and Curator Samantha Johnston. Todd Edward Herman, Denver Collage Club, Alto Gallery and the Unperson Project came together on ”three unique collaborations into one exhibit.” The exhibition sought similar themes: the pandemic, cancel culture, and our (now) relatively normal state of existential crisis. “The final act” of the show once again features The Unperson Project.

In keeping with modern times, Sink was sure to provide me with a list of the male to female ratio of exhibiting artists for both shows. In acquiring her BA in Art History from CU Denver, Photographer and Denver Collage Club member Sharifa Moore, spent her thesis exploring the representation of female-identifying photographic artists throughout the 2019 Month of Photography shows. Since, Sink has been sure to keep a tally of his own exhibitions, ensuring greater representation of female-identifying artists in our radiant creative community. Between Alto Gallery and Redline this week, the exhibited artists came in at 103 men to 208 women.  Denver Collage Club is composed of 26 female-identifying artists and 21 male-identifying. Shame exhibits 126 women, 44 men. Big Picture: 56 women and 38 men. Since Moore’s initial project, she has advocated that the local art community continue to take tallies of exhibitions, including racial demographics and a more inclusive list of personal pronouns.

A recurring theme in Sink’s stories, as we paced about the well-lit studio space, standing behind various rolling walls, or tip-toeing about prints laid on the ground or strewn across tables, was the necessity for the artistic representation of female artists. At 62 years of age, with Sink’s youth spent in the dramatic cultural milieu of 1980’s New York, he has had some time to reflect on the shifting ideals of a society constantly rubbing its eyes to the glaring inequalities of American society and artistic representation. Cancel Culture is a prevalent theme in the exhibitions opening this week, as is shame which oftens partners with the consistent flux of education and growth. Don your mask, make reservations ahead of time, and please, just try to stay out of trouble.

THOUGHT OBJECTS: Being, Essence and Notion

THREE ACTS: A Survey of Shame, Emotion, and Oblivion

Part of Month of Photography (MOP), Curated by Mark Sink