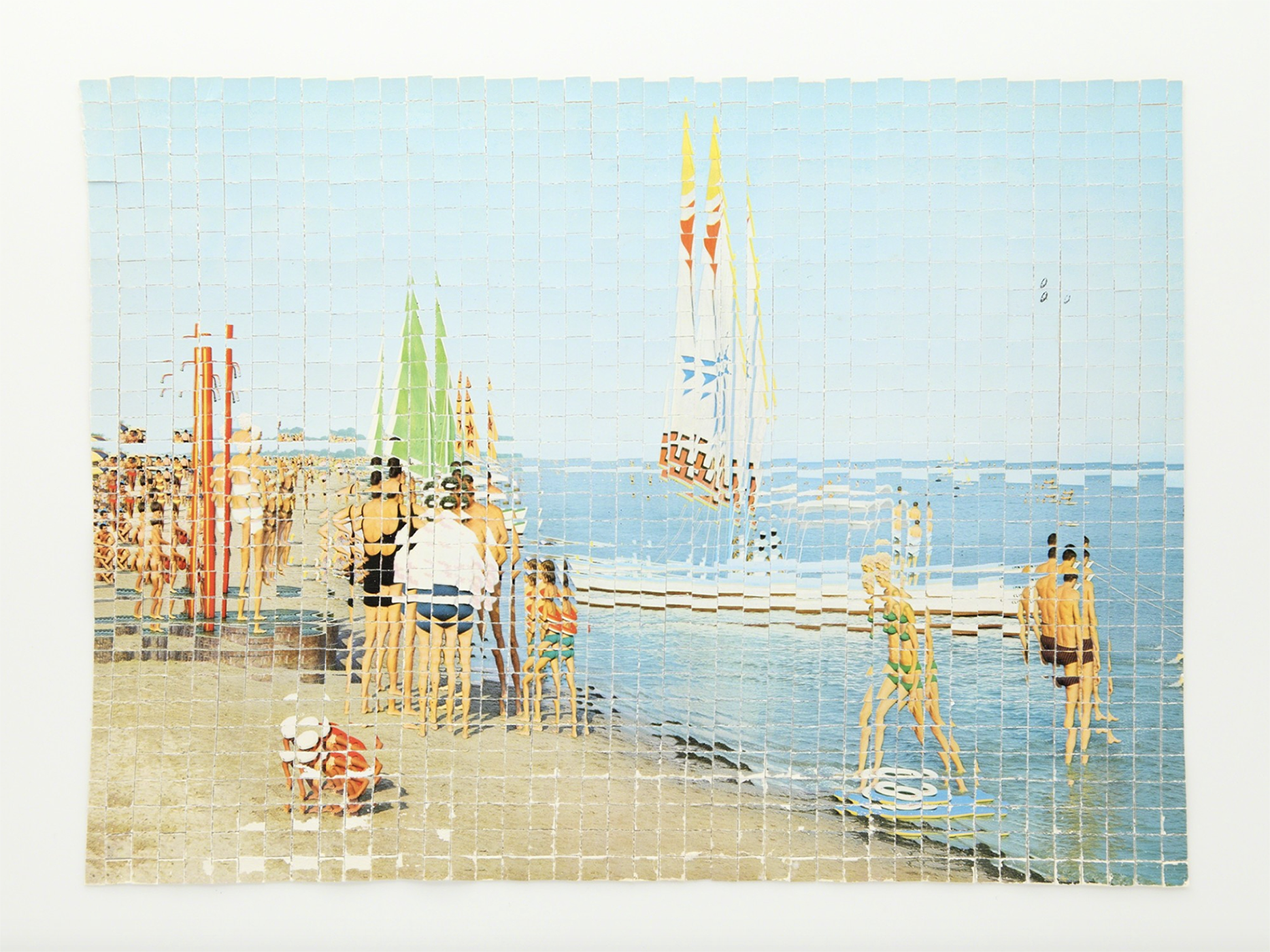 As we enter the doldrums of our first Covid-winter, the pleasures of summer and social gatherings seem distant and unimaginable. Long nights, cold temperatures, and restricted communal activities have transformed the prospect of a relaxing day at the beach into a dream: a vague, almost forgotten memory of a previous life for which so many of us long.

One would not argue with an audience, then, if they were to interpret collage artist Kensuke Koike’s Big Beach (2016) through this nostalgic lens of desire for time and pleasure past. For at first blush, this reading seems apropos of our current moment.

Koike’s collage interlaces several iterations of the same vintage, picture postcard whose illustrated image captures an idyllic scene. A perfect blue sky expands over a sandy lee shore with several small vessels anchored in the shallows; surfboards, standing erect, wait to be used; children dig playfully in the sand; folks congregate in conversation, while others wade into and out of the ocean; and, in the background, an endless succession of people in increasingly smaller scale occupy themselves with similar activities.

Of course, the staggered interlacing of different iterations of an image creates a disorienting effect that induces an optic vertigo, upends our sense of normalcy, and induces an estrangement that leaves us in a liminal state between recognition and confusion. The viewer is simultaneously moored in a particular moment and tempest tossed in a collage-rendered, visual squall.

The tension between familiarity and estrangement mimics our current lives. We still go to work or attend school, but now online through Zoom; we shop for our weekly goods at the grocery, but wear face coverings in buildings with limited capacities; we visit with friends and family, but apart at six-foot distances. Our Covid-lives retain a semblance of our pre-pandemic existence, but the differences have left us out-of-sorts, despondent, and longing for a return to “normal.” To extend the nautical conceit: we are seasick and long for the stability of home’s firm ground.

Although such surface-level interpretations function as comprehensible entryways into the collage, they gloss over more nuanced engagements with it. To this extent, the artist himself offers us other interpretative models in which to consider his work. In a recent interview with Alexander Hansford in the inaugural issue of the art magazine Tangram, Koike mentions that:

Sometimes you see something handwritten on the back of the photo—messages to lovers, dates, names, little notes… I always leave those messages. They’re as much a part of the piece as the image on the front.

The artist’s focus on missives or marginalia on the “back of the photo”—and his insistence that they are “as much a part of the piece as the image on the front”—harkens back to Jacques Derrida’s investigations of the supplement as “a surplus, a plenitude enriching another plentitude” that “determines…the conceptual oppositions within” a work. Furthermore, he notes that the supplement is “an infinite chain, ineluctably multiplying the supplementary meditations that produce the sense of the very thing they defer: the mirage of the thing itself, of immediate presence, of originary perception.” By elevating the supplementary to a conceptual driver and “the very thing” that “determines” the reading of a text, the philosopher’s meditation closely aligns with the artist’s affirmation of the “back of the photo.”

The picture postcard that Koike appropriated for his Big Beach collage is no exception. On the back, lower-left corner of his artwork, a jumble of alphanumeric characters scatter across the surface. Realigning the printed text into a comprehensible message, it reads: “MULTIFOTO – TRIESTE – Tel. 44.886”.

From this marginalia, one may assume that the image rendered on the front of the postcards is a beach scene near the port city of Trieste, Italy. (It is, in fact, a beach in the nearby village of Grado.)

Trieste, for its part, has a complex and variegated history. Located in the most northeastern reaches of Italy and nestled between Croatia and Slovenia along the coast of the Adriatic Sea, the city serves as the capital for the semi-autonomous Friuli Venezia Giulia region. Geographically, it acts as an interstitial space between eastern and western Europe.

The city is also culturally diffuse. A 2017 Wall Street Journal exposé notes that Trieste is “culturally indebted to the Balkans, to the Venetians, to the Austrians, the Greeks and the Jews, all of whom thrived there.” And this is to say nothing of the fact that, with the 1869 opening of the Suez Canal, the city became a major port for trading and shipping with the Indies, bringing with it an even more diverse, socio-economic milieu. Add to this mix a robust, international influx of tourists, and Trieste’s cultural diversity only grows more expansive.

Certainly, Trieste is a geographically and culturally interlaced area; and, in such dynamic places, a tension between difference and similarity exists. When affirmed, such tension produces vibrant cultural products that stimulate intellectual, political, and aesthetic growth; when viewed with suspicion, it exacerbates antagonisms and generates conflict. Either way, this tension enables us to conceive more poignantly of what binds us together, as well as what sets us apart.

How, then, does this information regarding Trieste’s diverse identity help us in understanding Big Beach; or, at least, how does it help us understand Big Beach differently from the Covid-centric reading offered at the opening of this review? The material construction of the artwork—its gestalt, if you will—speaks toward tensions fostered from and between difference and similarity: the collage contains different physical objects interlaced to create a cohesive whole; or, conversely, the collage contains four, nearly identical replicas arrayed differently in order to construct a beautifully vertiginous wickerwork. In this sense, Big Beach’s procedural logic generates a tension between similarity and difference analogous to the tensions produced within culturally diverse cities such as Trieste. Importantly, though, the supplementary text on the backside of the artwork fosters this line of inquiry.  As Derrida argued, the supplement functions as an enrichment to the artwork by adding to the “irreducible complexity” of the collage and our interpretation of it.

The “MULTIFOTO – TRIESTE – Tel. 44.86” supplement, though, does more than just provide a timely and engaging meditation on identity and culture. It functions as a catalyst for other investigations as well. For instance, one can employ the supplement for pedagogical purposes, since the scattered text provides a concise and easily readable map for how to create other collages in this manner.  (And, in a process-oriented homage to his Italian source material, Koike used a Tipo Excelsius pasta maker to slice the postcards into small strips and squares.)  Likewise, the supplement could serve as a starting point for conversations about the optic nature of printed language and the way in which individual, alphanumeric characters are themselves discrete, works of visual art. This conceptual trajectory raises questions such as: how does a character—especially when displaced—operate as a visual experience, as opposed to acting as a conduit for a systematic mode of comprehensible communication. This is all to say that, as Derrida would argue, the supplement, or that which is written on the backside of the photo, “is the image”: a message, as the artist claims, that is “as much a part” of Big Beach “as the image on the front.”