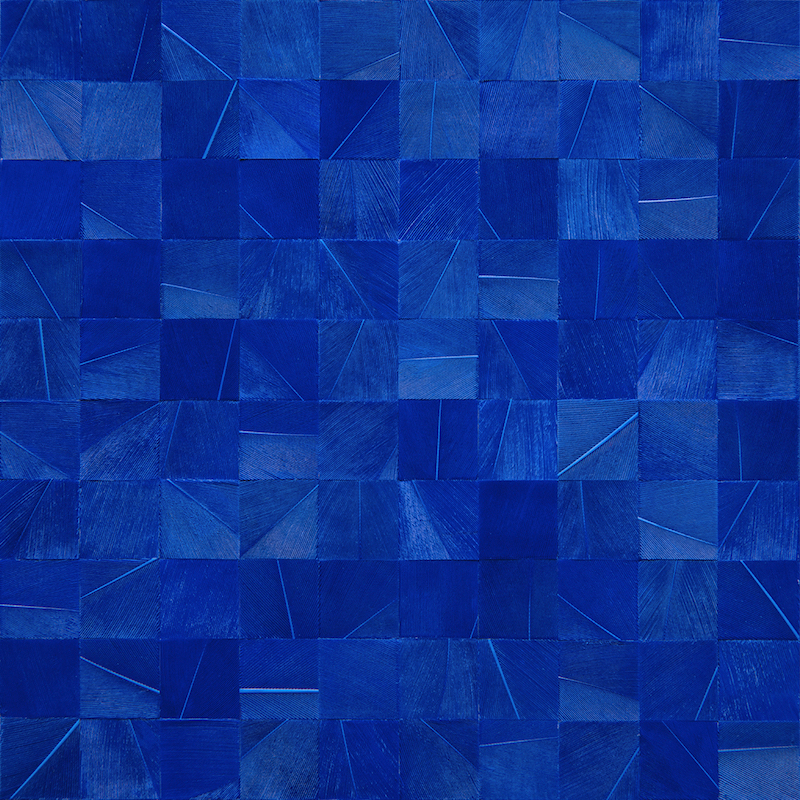 15. I think of these people as my blue correspondents, whose job it is to send me blue reports from the field.

226. As I collected blues for this project… I imagined creating a blue tome, an encyclopedic compendium of blue observations, thoughts, and facts.

2. From the recent exhibition Unearthing the Mirror at Sacardi Ayers Bacino, de la Mora’s 900 VII is part of his Neornithes series, which explores the confluence of Latin American history, politics, art, and ecology.

3. In a synopsis of the artist’s project, curator and critic Gabriela Rangel wrote: “Gabriel de la Mora has created the series Neornithes, two-dimensional works made with feathers that adopt as their titles the scientific name used to classify all birds. These works, in monochrome or with abstract color patterns, make use of colonial feathered art, which dates from the Viceroyalty of New Spain (16th and 17th centuries) and which encompassed fabrics and decorations that contained an expression of Nahua culture. The Neornithes unearth old debates over the appropriation and recovery of the indigenous past, transporting them this time onto the terrain of the universalist aspirations of the avant-garde movements that advocated abstract art in its Latin American versions, from which Mexican modern art was programmatically removed.”

4. The blue feathers that comprise 900 VII are, as noted in the artwork’s meta-data, pigmented turkey feathers. Turkeys, obviously, do not sport blue plumage. Without the catalogue text, then, the collage enacts a visual ruse; for one might surmise, otherwise, that de la Mora culled his materials from a blue-feathered bird. Or, for that matter, incorporated synthetics.

5. But deception is nothing new to artists, to avian (e.g. the mockingbird mimicking a car alarm), or to the color blue. All traffic in the art of deception.

6. “In visual perception a color is almost never seen as it really is,” writes Josef Albers in the introduction to Interaction of Color, his seminal 1963 text on color theory. He continues: “In order to use color effectively it is necessary to recognize that color deceives continually”; moreover, he notes that “it should be learned that one and the same color evokes innumerable readings.” If we are to believe Albers, color is mutable and our understanding of it diffuse.

7. It is odd, then, that during one of his color exercises that requires students to select eight strips of paper made of different “tints, shades, or tones” of blue, he writes the following: “The choice of the bluest blue…will easily find agreement.” Why is this the case? If perception of color is contingent, subjective, and ultimately deceptive, how do we select for the “bluest blue” with a certain level of uniformity? And what makes one blue bluer that others? The bluest?

8. “I didn’t write out the music for Kind of Blue,” said Miles Davis of his 1959 jazz masterpiece, “but brought in the sketches, because I wanted a lot of spontaneity in the playing. I knew that if you’ve got some great musicians, they will deal with the situation and play beyond what is there and above where they think they can.” Indeed, Davis trusted his players to transform his art into something above and beyond his expectations. Something transcendent. Something more.

9. Of the musicians performing on Kind of Blue was a young, relatively unheralded saxophone player named John Coltrane. He would, shortly thereafter, record some of the most accomplished music of his career, including the albums Giant Steps, My Favorite Things, and 1965’s iconic A Love Supreme. These albums would solidify Coltrane’s reputation as one of the greatest tenor saxophonists of all-time.

10. During David Lynch’s career-making film Blue Velvet, Isabella Rossellini’s character Dorothy Vallens sings the Bernie Wayne and Lee Morris-penned song from which the movie takes its title. By all accounts, it is a well-delivered, sultry rendition.

11. But arguably one of the most enduring moments of Blue Velvet is an act of musical deception: when Dean Stockwell’s character Ben lip-synchs Roy Orbison’s “In Dreams.” As he performs his routine under a curtained archway, Dennis Hopper’s deranged Frank Booth stands beside him. Fascinated. Enrapt. Halfway through the performance, Booth snarls, abruptly turns off the music, and shouts: “All right. Let’s hit the fucking road!”

13. From 2008 through 2011, I lived in Lincoln, Nebraska in order to pursue my doctorate in English Literature and Creative Writing. One of my few friends in town was fellow writer and doctoral student Jeff Alessandrelli. Tacked onto his living room wall, above a large sofa, was a poster reproduction of Thomas Gainsborough’s The Blue Boy.‍

14. Over the course of several years and innumerable, late-night revelries, we thoroughly defaced the reproduction: a curlicue, sharpie mustache; a litany of absurd missives; and, if my memory serves me properly, an ejaculating phallus showering the blue-attired boy with semen.

15. I have never seen Gainsborough’s The Blue Boy in-person, which is located at the Huntington Art Gallery in San Marino, California. I have only seen Jeff’s reproduction.

16. “That which withers in the age of mechanical reproduction is the aura of the work of art,” wrote Walter Benjamin in his famous essay “The Work of Art in the Age of Mechanical Reproduction.” The German philosopher goes on to argue that “the technique of reproduction detaches the reproduced object from the domain of tradition. By making many reproductions it substitutes a plurality of copies for a unique existence.”

17. On some registers, I agree with this sentiment. The lush, blue palette of Van Gogh’s Starry Night, for instance, loses much of its awe-inspiring artistry when reproduced ad nauseam on posters, calendars, hand bags, t-shirts, coffee mugs, and social media feeds, etc. The image’s reproduced ubiquity renders our relationship to it less magical, more mundane. It no longer enchants; its spell has been broken.

18. When I eventually viewed Starry Night first-hand at the MoMa’s temporary site in Queens, New York many years ago, I remember an odd sensation. Yes, Benjamin was correct: the artwork lacked the novelty of a unique existence and experience; but, he was also incorrect: the impasto ridgelines of Van Gogh’s oil paint were not something I previously had seen. The materiality and details of the original offered something which two-dimensional reproductions could not provide.

19. More recently, I visited the Clyfford Still Museum to see an exhibit of the Abstract Expressionist’s late-works. Hanging in one of the first gallery rooms was his massive PH-247 (1951), whose surface contained large fields of blue applied in vertical strokes with a trowel (along with a central field of black and a swathe of raw canvas on the left-edge). The layering of oil paint produces various hues, densities, and sheens that a reproduction would be hard-pressed to capture.

20. I would argue that, far from eradicating the aura of an artwork, the onset of mechanical (and now digital) reproduction has simply re-located the aura; it has shifted from the work of art as a holistic image and singular experience to the work’s materiality and the various, close-inspection details that are less apparent in a reproduction. The aura now lives in the minutia and the materials.

21. I have never seen de la Mora’s 900 VII in-person, which is currently on-view at Sacardi Ayers Bacino in Houston, Texas. I have only seen reproductions. The materiality and subtle nuances of the piece, as well as its aura, are foreign to me.

23. Bluets contains 240, enumerate propositions. Nelson crafted the collection as a formal homage to the Austrian philosopher Ludwig Wittgenstein, whose only published work during his lifetime was Tractatus Logico-Philisophicus. His treatise takes the form of seven enumerated propositions.

25. What is idiosyncratic need not be unique; rather, it simply can be the first installment of a new and vibrant tradition.

26. The poet Fredrico García Lorca once wrote: “If blue is dream / what then innocence?”

27. Lorca also wrote that “the hair of the camel stands on end with a violent blue shudder,” which was to be found at a wall where we are to take:‍

men who still have marks of the claw and the thunderstorm,
and that boy who cries because he has never heard of the invention of the bridge, or that dead man who possesses now only his head and a shoe.‍

28. For Lorca, blue may or may not be a dream; but a “violent blue shudder” certainly awaits us at the precipice of death.

29. Perhaps Benjamin’s aura is simply duende recast into another idiom. For, as Lorca wrote, duende “shakes the voice and the body” and initiates “a real, poetic escape from the world.” It “squeezes out those lemons of dawn, a country of death, a country open to death.”

30. “I have made some pieces where the same composition or image is made with hair in one and with feathers in another,” says de la Mora of his Neornithes series and its associated projects. Recently, he has “been exploring the third stage of this series using fish scales.”

31. Blue Planet narrator and ecological activist David Attenborough cautions us: “All across our planet, crucial connections are being disrupted. The stability that we and all life relies upon is being lost.”

32. Just as Attenborough’s various documentary projects, such as Blue Planet, investigate the interconnectedness of life on Earth, so too does de la Mora’s collage work. The artist notes: “mammals, birds, and reptiles alike may be found in water, in the air, and on earth”; the use of these materials connects “in a certain way with the theory of the evolution of species.” They connect different ecological systems and highlight the necessity of biodiversity.

33. Toward the conclusion of Interaction of Color, Albers claims that “it is a fact that articulate boundaries between colors can be made nearly unrecognizable, or made practically invisible.”

34. Where does blue end and other colors begin? How does one shade of blue differentiate itself from another shade of blue?

35. How do the crucial connections of ecology mirror the unrecognizable boundaries between colors? And how do those connections and boundaries help to articulate an aesthetic project such as Neorthines?

36. Attenborough often concludes an episode or series with a warning related to the dangers of poor stewardship and ecological devastation; typically, he follows these dire admonitions with a hopeful challenge that, if we act now, there is still time to preserve our bountiful and diverse planet.

37. “Our planet is a blue planet,” Attenborough says, and “What we do in the next twenty years will determine the future for all life on Earth.”

39. One day, we will enter the country of death on wings made of de la Mora’s feathers and feel the violent blue shudder that awaits. One day our bodies will shake. Our voices will shake.

40. There is a land‍
far, far away
and I will go there
every day.
- Robert Creeley, from “Homage to Lorca and Bly”‍

41. In the closing stanza of “The Waste Land,” T.S. Eliot’s speaker casts a final glance over the decaying panorama of civilization and declares: “These fragments I have shored against my ruins.”

42. In the country of death, our crucial connections and unrecognizable boundaries will transform into fragments and ruins.

43. “In any case,” Maggie Nelson writes at the end of Bluets, “I am no longer counting the days.”