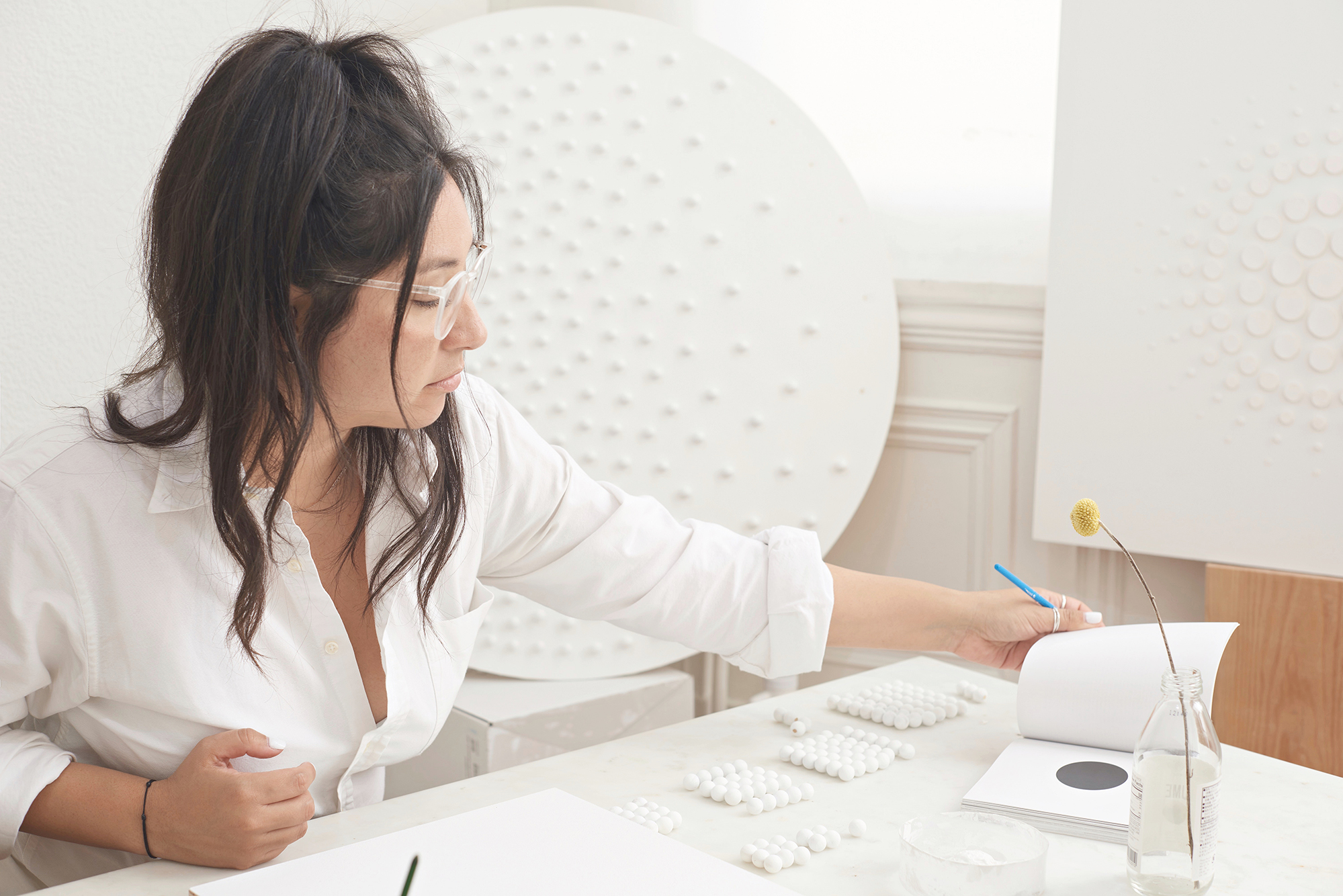 Jessie Laura and I waited in freezing temperatures on a train platform in Brooklyn, NY during the early hours of a February morning in 2019. We planned to travel by train to the Dan Flavin Institute in Bridgehampton; but the city had just been hit by a Polar Vortex, and everything was severely delayed. We waited. And waited. And waited. Our train finally arrived. Upon boarding, though, we discovered that we had missed our connection further down the line.

Despondent but undeterred, we altered plans, headed to Midtown, and visited the MoMA. While there, we saw the Bruce Nauman retrospective Disappearing Acts, a room of Agnes Martin paintings, and a handful of Ellsworth Kelly pieces. Of particular note was Kelly’s White Relief over White (2003): two curved, canvas-covered panels painted white and arranged in such a way that the smaller panel jutted out at an angle from the lower-left corner of the larger one. The panels’ arrangement and the museum’s lighting created shadow play that provided an otherwise monochromatic artwork with a subtle but dynamic grayscale. Indeed, the White Relief over White was austere and intelligent in its presentation, but also unassumingly playful. I was enamored.

I felt both pleased and nostalgic, then, when I recently scrolled through my Instagram feed and saw an image of Laura’s While I Bloom (2021). Her acrylic and wood assemblage employs a layered pattern and monochromatic surface similar to Kelly’s painting.

Yes, her piece reminded me of our trip to the MoMA in 2019; but it also prompted me to reflect on how far, aesthetically-speaking, she’s traveled during the course of the past several years.

In early 2018, I was introduced to Peruvian-born and then New York-based Laura through her collage Molding Her, which the Brooklyn Collage Collective hosted on their Instagram account. While the piece trafficked in the absurd, dream imagery indebted to Dada and Surrealism, certain aspects of the work resonated with my own, shifting sensibilities. To begin with, Molding Her contains a minimal number of elements: a vintage black-and-white portrait of a faceless woman set against a faded pink background, a tan triangle framing her head, and a vertically staggered array of white, gray, and navy strips of paper. Second, the inclusion of geometric forms engaged, to my mind, an historical lineage less frequently associated with collage.

Soon thereafter, Laura’s overall aesthetic changed quite dramatically. She more readily incorporated the aforementioned geometric abstraction into her visual idiom; and, as a consequence, her collages focused primarily on shape, placement, size, and color rather than representational imagery. The collages Victory over the Sun, Manifesto, and Kinetic S, which act as homages to the Russian avant-garde, encompass this moment in her transformation well.

Exploring the aesthetic moves and conceptual framework of Suprematism, her artwork from this period echoes Kazimir Malevich and El Lissitzky. “An objective representation, having objectivity as its aim, is something which, as such, has nothing to do with art,” wrote Malevich in The Non-Objective World. To this extent, he believed that feeling and sensation could be most adequately expressed in art through non-objective (i.e. abstract) imagery. For Malevich, the apotheosis of these formal and conceptual gestures was Black Square; as the name suggests, the painting is, simply, a black square.

To some extent, Laura agrees. Via email, she expressed to me that abstraction has the ability to “convey…emotions, sensations, [and] energy” better than representational imagery.

Regarding her move to white-on-white, Laura says it began with a question:

What happens if, instead of being restricted to the images I could find, I created my own restrictions? This is how I slowly started to use less archival materials (e.g. photos from magazines and books), and instead utilized shapes I created with paper. Later on, I started to dive into limited color palettes to focus on composition, movement, dynamism [and] to use…the least resources possible.

The engagement with restriction, again, recounts Malevich and his belief that one could “free art from the dead weight of the real world” by radically reducing their visual idiom. But, as Laura notes, such restrictions afford her an opportunity to explore different ideas with a more intense or heightened focus.

Once she began working through this restricted mode of production, she found that “light, shadows, and perspective became fundamental elements of [her] work”; in a certain sense, working with shadows formed by ridgelines of paper cuts and depth provides its own exploration of color via grayscale. Or, in Laura’s words, it offers “subtleness” of color and composition.

The line work in these first monochromatic pieces provides viewers with multi-directional, often erratic trajectories. The collages’ sightlines guide the eye along a variety of vectors that induce optic chaos in an otherwise subdued visual experience. To this extent, her collages from this period produce a subtle tension between oppositional, aesthetic tendencies. But this too would soon change.

After relocating from New York City to San Francisco, Laura jettisoned the chaotic line in favor of repetitive patterns. Rain on Me, Venus and Pythagoras Were Friends, and Ebb and Flow are three examples.

While “the use of repetitive patterns allows me to explore different perceptual effects [that create] dynamism and rhythm,” she says, “generating patterns” fosters a “meditative environment that I find pleasurable, yet challenging.” In other words, she juxtaposes the difficulty of meticulous hand-cuts predicated upon symmetry against the serenity a repetitive action can produce. To my mind, her newer work’s ability to harness dynamic rhythms, while simultaneously eliciting meditative states, represents their most striking characteristic. By holding these two contradictory aspects in productive tension with one another, her artwork moves us through calmness.

Never one to remain too situated within a particular space, Laura recently transitioned into new material realms while maintaining an adherence to her previous aesthetic. As the aforementioned While I Bloom demonstrates, she has begun to employ wood and acrylics, creating assemblages that incorporate sculptural principles into their design. As she explores these new material realities, it will be interesting to see how her work adapts to them.

Jessie Laura is a mixed media artist and art director based in California.

Joshua is an artist and writer based in Denver, Colorado.