Communicative Considerations for Civic Engagement: The Works of Alexandra Bell and Laura Shill

Communicative Considerations for Civic Engagement: The Works of Alexandra Bell and Laura Shill 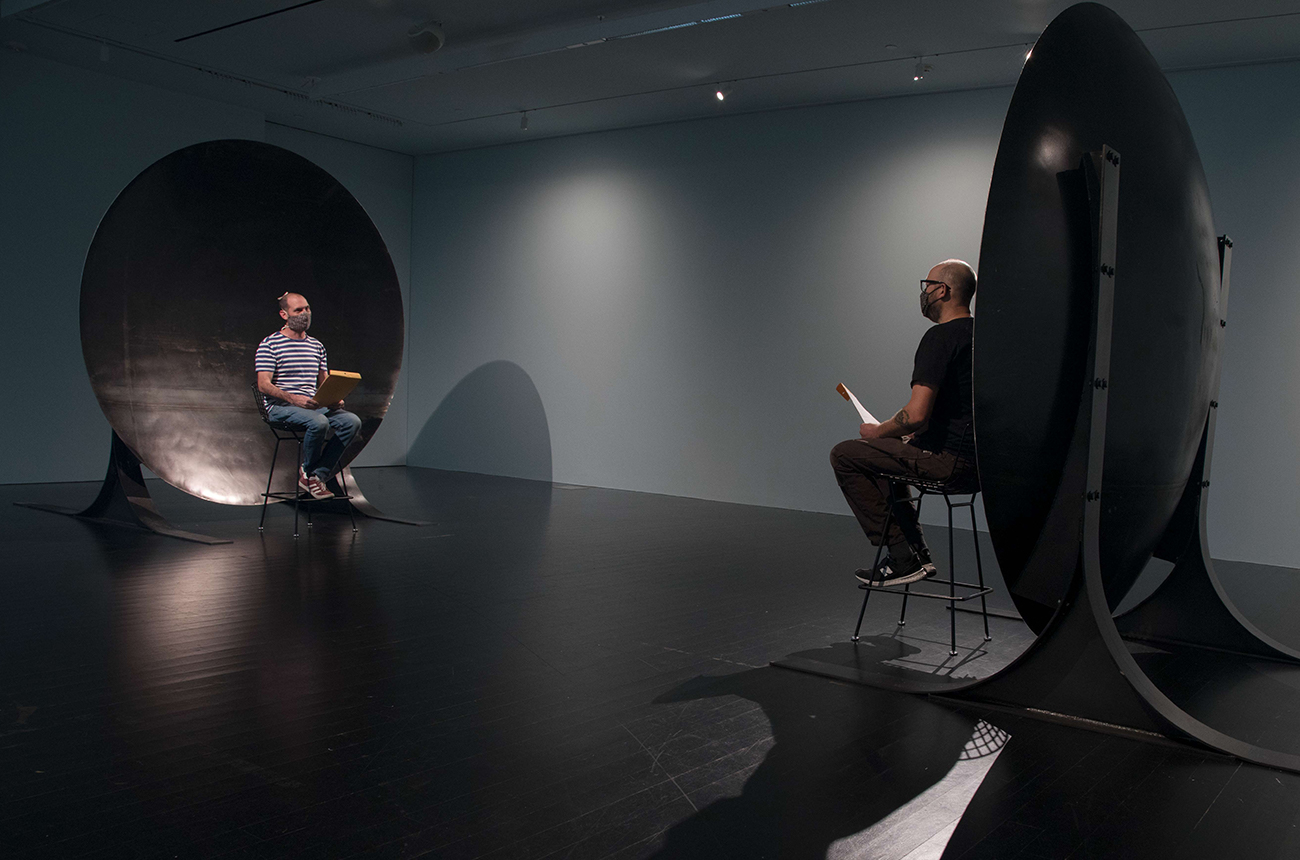 Citizenship: A Practice of Society at the MCA Denver houses works by more than thirty artists and institutions. Examining political and humanist issues since 2016, the exhibition focuses on the role of citizens within a collective society. Two artists within the exhibition focus on major news outlet The New York Times, albeit from two radically different perspectives. If Alexandra Bell’s Counternarratives exposes the wound in our collective history, Laura Shill’s Including Other in the Self, seeks to (ad)dress and repair it.

New York-based artist Alexandra Bell seeks to expose the implicit bias in major news outlets through her public works. Her piece Counternarratives, debuted with a wheat-pasted installation on a city street in Bedford-Stuyvesant, Brooklyn. Today, it appears as a series of framed triptychs and diptychs. Bell’s work reminds the viewer that our collective histories are shaped by the media we leave behind. We must question who is writing our histories, who it serves, and who it leaves out. Using the front-page layout of the headlines of the NYT, she exposes these inadequacies. Redacting certain areas of the text, the artist also makes red-inked notes, re-shapes headlines, and shifts the layout to show the viewer where these biases may subtly—or unsubtly—lie.

A Teenager with Promise (Annotated) addresses the murder of Mike Brown. The headline for August 25, 2014 in the first panel of the triptych reads: “Two Lives at Crossroads in Ferguson.” Bell circles “two lives” with red ink, writing “they weren’t peers.” In the short biography given to Brown, the NYT journalist brings up the use of alcohol, drugs, and Brown’s recent exploration in amateur rapping. He describes the young man as “no angel,” while the counter-column to the left describes the accolades of Officer Darren Wilson over a commendation for a different case. Rather than addressing Brown’s unfair victimization through police brutality, the article highlights many of the young man’s faults. The headline itself, “Two Lives at Crossroads,” diminishes the unequal pairing of the two in Brown’s fatal moments: A black eighteen-year-old man and a twenty-eight-year-old white police officer. As of July 30, 2020, prosecutors chose not to press charges against the officer, Darren Wilson. Mike Brown, however, has been buried for four years over a pack of stolen cigarillos. Reports indicate Brown had been shot six to eight times.

The second panel shows the two biographical columns as the only feature of the front page. The headline now reads “Crossroads in Ferguson.” Through redacted text, Bell leaves only these words visible: “Officer Darren Wilson…., fatally shot an unarmed teenager named Michael Brown.” The column for Brown, “Michael Brown Jr…, his shooting death by Darren Wilson, a white police officer.” The third panel, with no editorial marks shows a photograph of Brown in his high school graduation cloak and cap. The headline: “A Teenager with Promise.” Each of the panels bear the same date, August 25, 2014. Bell’s work not only exposes the implicit bias of the NYT but attempts to repair it.

Two floors away is Including Other in the Self by artist Laura Shill. Here, the artist has borrowed 36 questions created by a team of psychologists in the 1990s and popularized by the NYT in an article titled, “The 36 Questions That Lead to Love.” Two participants are to sit across from one another, each before large circular steel constructions facing one another. Shill calls them “acoustic-mirrors.” According to the artist, these acoustic mirrors were “initially conceived of during wartime. A parabolic disc aimed toward the sky could warn of distant bomber planes approaching before they were visible to the eye. Two of these same forms facing each other with focal points aligned, can instead become a passive device that allows a whisper to travel across a great distance and into a listener’s ear.”

She uses this war-era communicative device to instead elevate the voices of the participants in their meaningful dialogue as they ask each other a series of increasingly intimate questions. While perhaps most meaningfully performed with two strangers, the work can be done by any pair of individuals. The acoustic mirror amplifies the voices of the participants, as so that the lightest of voices become amplified and surround the other participant. Shill uses the questions to address our collective crisis of communication and the “erosion of social ties by technology.” The polarizing politics of our contemporary society often feels as though our citizens are ideologically pitted against one another and in a constant battle.

We can see this in the comment sections of social media posts, the overwhelmingly close metrics of political polls, and public health decisions such as to mask or not to mask in a global pandemic. Shill’s piece intends to seat two people who may never cross paths otherwise and have them connect on a much deeper level than our initial—and often shallow—perceptions of one another. She presents us with the opportunity to act civilly and engage with one another in a way we may have collectively forgotten how to do. The questions begin somewhat neutral but quickly become more intimate. They ask about our family relations, our value systems, and our morals. In one question the participant is asked to tell their life story in four minutes. When the author of this article tried the questions with her best friend of seventeen years, we realized that this incredibly condensed version of the way we told our lives exposed our most important values and/or sense of accomplishments or failures. To be frank, the night ended in tears and our already strong connection felt as though it had been impressed upon and strengthened even further.

In order to move forward in our society, we require collectivity. We require community. We need to hold one another accountable, and to teach one another. While Bell’s work examines the wound, Shill’s work looks to (ad)dress it, reminding us that through communication and collective engagement, we can create meaningful change in our society.