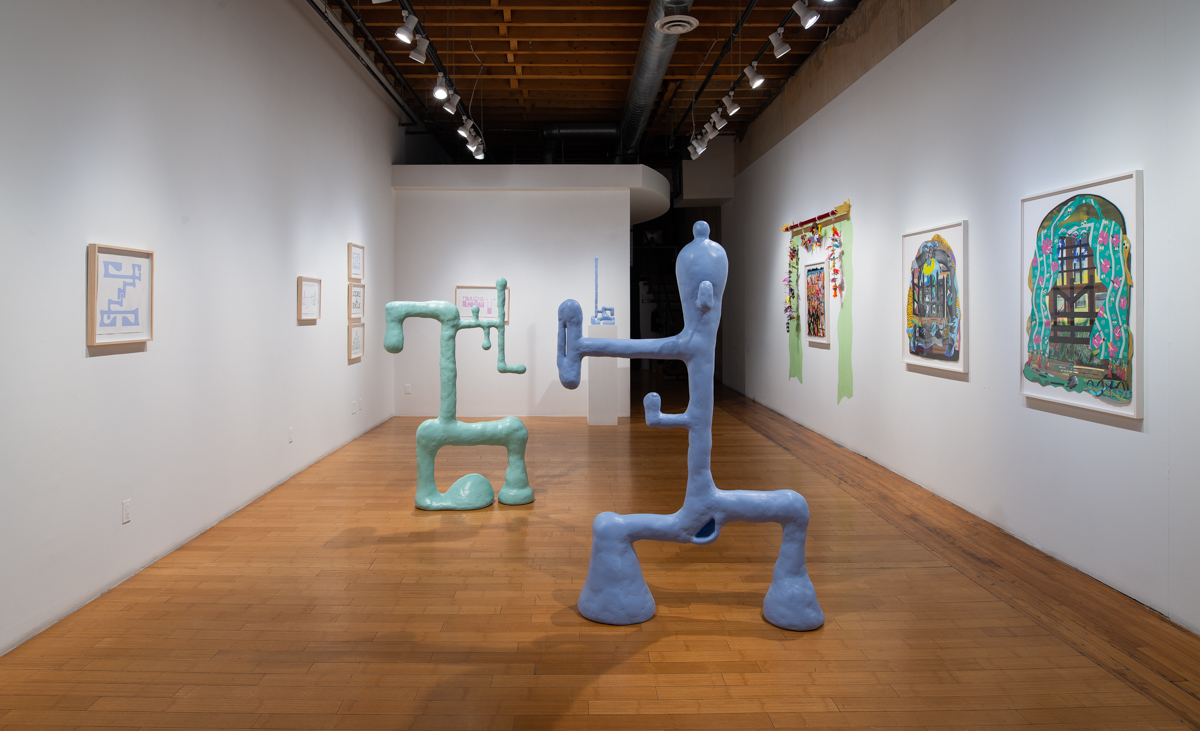 Food, water, and shelter: The three universally accepted basic elements necessary for human life. Our bodies, the conduits of cultural expectation formed by the conditions of society, are the living containers of sensation and experience. However, to disregard the architectural conditions of our bodily experience; to ignore the containers of our bodily containers, would be similar to analyzing the life of a hermit crab without its shell. In the sculptural work of Amber Cobb and the mixed media collage of Amy Boone-McCreesh, presented side by side in the 2021 exhibition Negotiating Spaces at David B. Smith Gallery (Denver, CO), living flesh and its cultural ramifications are intimately considered, exposing the invisible, interior factors that underscore the affective potential of physical space on the physical body.

Which way does influence flow? The decisions we make, the domestic spaces we occupy, the clothes we wear - individuality - evidenced in our homes, possessions, and adornments, may have very little to do with us. This idea, circulated through artistic conversations for decades, lends itself readily to the mode of collage. With historical origins in Dada and Surrealists, Pop Art, and Feminist art histories, today the meaning of collage feels second nature, logical. The experience of viewing disjointed imagery and correlating ideas falls short of the jarring impact it had when printed media was getting its start. Inundated with images, with vastly opposing information neatly lined up in browser tabs and social media feeds, it is hard to shock the modern viewer. Today, collage can be expanded past its paper and assemblage histories, to be considered as a mode of existence; we can be understood by the physical objects, relationships, and experiences we bring into our lives.

Like the shell of a hermit crab, the physical spaces we occupy can be adjusted to suit growth. In contrast, the common goldfish, whose body mass is involuntarily augmented by the size of its container, the hermit crab’s shell reflects the agency of the hermit crab. For humans, born without consent into socio-economic realities and raised on culturally preapproved food and media diets, it is less clear whether the link to hermit crab or goldfish is more befitting.

The philosophy of collage, a close cousin of assemblage, could be considered one of editing and selection, and conversely, one of addition and collection. Amy Boone-McCreesh uses the tools of collage and assemblage to explore her fascination with the aspirational cultural promise of upward mobility. Exuberant, even frantic at times, Boone-McCreesh layers meaning in gloriously unrestrained works that are reminiscent of prickly folded waves of cut paper and found elements. Through the use of overdecoration that repels tidiness as it threatens to spill onto surrounding walls and surfaces, the concepts of fashionability and connoisseurship come into play, asking viewers if good taste is innate or shaped by societal containers.

In her 2020 work The Neighbors are watching, an amoebic, flowy curtain patterned with pairs of cartoon eyes frames a metal grate window looking out onto a scene of other presumably residential city windows. With clear sights into the interior space of the home and out into public space, at whom the eyes on the window drapery express their surprise and disapproval is unclear. In this work one considers visibility versus exposure, and the physical space that allows for curious eyes to penetrate the privacy of domestic space. Like a goldfish swimming in the world of its bowl, the concrete architecture of the home outlines a psychological border that in turn reflects a societal boundary.

Contained in the rigid infrastructure of our homes, our soft bodies are the sum of our experiences- the living containers of both pleasure and violence. Though subject to external factors, bodily intelligence is instinctive, over time creating constellations of desire and disgust. This innate intelligence comes into play as we negotiate the domestic sphere, particularly when cohabitation is a factor. Spouses, lovers, pets, roommates, and intruders alike, all affect the understanding of self in our private spaces. The presence of another, like a residue, covers the domestic spaces we share.

Bodily awareness is not always a spiritual or beautiful experience, as pop culture health and wellness messaging would have us believe. Recognition of limitations or physique have powerful potential to negatively shape our conceptions of self - the hermit crab outside the shell may find itself lacking. In Amber Cobb’s biomorphic sculptures, however, there is a cheerfulness in the wiggling limbs of free-standing sculptures that seem to take pleasure in their utility. Colored in disarming pastels, sculptures built with wood and steel armature skeletons have soft and fleshy-looking surfaces. Cobb, whose sculptural work often incorporates repurposed thrift-store furniture, is adept at creating new ways of functioning by transforming the worn in histories of pre-owned functional objects. Sculpted for specific purposes such as holding keys or hats, Cobb’s sculptures enjoy a soft-hued world where their useful bodies are exactly as they should be.

Born of awkward embodiment, Cobb’s sculptures featured in Negotiating Spaces reference letters of an illustrated, biomorphic alphabet. The term character is taken quite literally in her artist’s typeface, whose curved and looped body-like forms work to abstract language, addressing its failings. Developed over long days of domestic confinement, the characters in Cobb’s alphabet seem to pivot and cavort with and through one another. In works such as Righty (2021) and Lefty (2021), centered in a group of tabletop sculptures, the pair seem to have a private dialogue. Framed by bystanders, a foot-like extremity solidly plants itself, posturing against its neighbor whose leggy protrusion happily winds upward. Bridging conversations between bodily and spoken language, with a coded alphabet of globular dancing bodies, there now exists a visual dialect to best describe coexistence and its romantic machinations.

In the architecture of the home we contextualize ourselves. Shelter, the third corner of the basic need trinity, is somewhere everyone must return to. Often occupied before us and sought out to suit lifestyle, the home is a changeable shell. Inside this shell, our bodily selves expose the affective terms of corporeality. We are independent of but not immune to the history of our shells, as the prying eyes of others fall on domiciles as easily as they do on skin. The container of the bodily container, we are reflected in our domestic settings. It is in these intimate places, in the cracks in the ceiling and in the soft folds of bodies in repose, that negotiations must constantly be made - within ourselves and with one another.

Marsha Mack for New Collection. Marsha is an artist and writer currently based in Denver, CO. marshamack.com